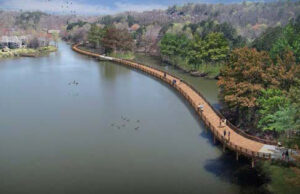 The Sandy Springs Conservancy (SSC) is pleased to announce that the city of Sandy Springs in January 2022 approved $6M in funding for the construction of the first segment of the Sandy Springs Trail Master Plan, Segment 2A at Morgan Falls.

SSC was the driving force behind the Sandy Springs Trail Master Plan and the upcoming construction of the first segment. The nonprofit initiated the plan proposal and provided $55,000 in funds toward the plan development and construction of Segment 2A.

“Were very excited, it’s a dream come true for us,” said SSC Board of Directors Chairman Jack Misiura.

In January 2019 representatives of SSC met with city of Sandy Springs officials and pitched the idea of developing a master plan for a walking trail system in Sandy Springs that would connect greenspace and parks. SSC offered to contribute $25,000 toward the plan if the city was interested. The city agreed to move forward and funded the remaining $50,000 for the development of a trail master plan.

With SSC’s recommendation, PATH, an organization dedicated to developing trails throughout Georgia, was invited to participate in the development of a trail master plan for Sandy Springs. In 2019 a trail master plan committee was formed that included representatives from SSC, PATH and city staff. The plan was completed and adopted by the city in the fall of 2019. The Sandy Springs Trail Master Plan outlines a total of 35 miles of trails and the city committed to building 10 miles of it in the first 10 years.

Initially a one-mile stretch along Marsh Creek, for which SSC and the city had previously split the cost of a feasibility study, was considered to be the first segment of the plan to be built. With input from SSC, Segment 2A, near Morgan Falls Overlook Park, was chosen to be the model section and the first segment to be built. Misiura and SSC Board member Terry Morris have since been serving on the trail plan implementation committee with PATH and the city.

“Construction of Segment 2A first is significant because it incorporates the crown jewel of our park system Morgan Falls Overlook Park and it’s located in a densely populated area where a lot of residents can use it,” said Misiura.

The total construction cost of Segment 2A is $9M. In January 2022 the city approved $6M and is in the process of applying for a $3M grant from the Department of Natural Resources to be applied toward the total cost. SSC’s $30,000 contribution serves as 1% of committed private funds required for the grant. The city of Sandy Springs is in the final stages of the grant application process. 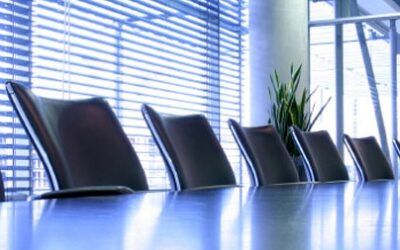 SSC Announces the 2023 Board of Directors

END_OF_DOCUMENT_TOKEN_TO_BE_REPLACED 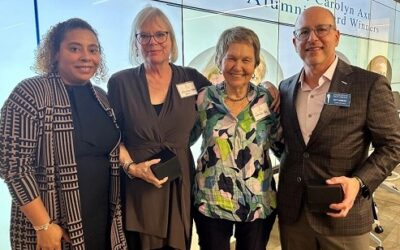 SSC Chairman Receives Award The Sandy Springs Conservancy is pleased to announce that our chairman, Jack Misiura, was one of three honorees to receive the annual Leadership Sandy Springs (LSS) Carolyn Axt Alumni Award, a prestigious award honoring the contributions...